FEM calculations have been included in KISSsoft on a long-term basis. For the calculation of planet carriers, gear body deflections and gear root stresses, FEM is used in order to better take into account complex geometric and/or loading conditions.

When performing FEM calculations, the FEM post processor is the most valuable tool to overview and understand the results. KISSsoft has its own postprocessor, which is integrated into the inventory of available KISSsoft graphics. This integration of the post processor into the KISSsoft interface results in a smoother process for analyzing machine elements.

Using the built-in post-processor, the user can gain a deeper look into the stresses and/or deformations exerted in the analyzed component. Since the above quantities are vectors (i.e. contain both a magnitude and a direction), their value gives just a part of the available information. Since KISSsoft Release 2021, the integrated post processor is extended to contain a deformed shape representation, together with an animation of the deformations of the analyzed component. In this way, the user gets an improved "feeling" of the FEM results, understanding also better how the component behaves under load. Modeling mistakes can be also easier pinpointed that way.

Further information on the integration of FEM in KISSsoft is available on request. 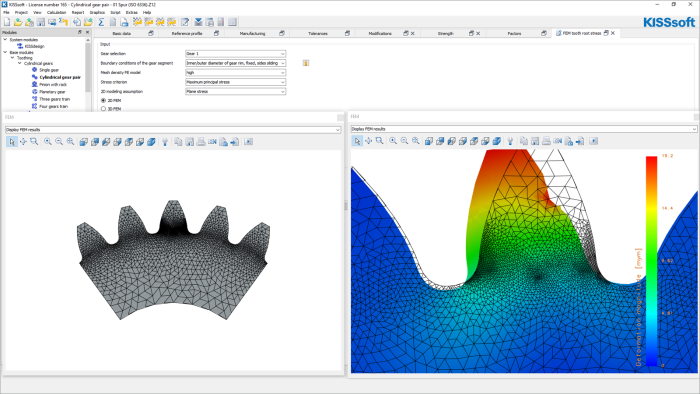 MyKISSsoft provides you with access to documents, product information and downloads related to your KISSsoft license.

We will save your personal data only for the purposes described on the register page and we will not forward you data to third parties.